The Myth of Chinese Privilege Racism in Singapore

MA graduate in PPE. I enjoy satire, spaghetti westerns, Wu-Tang Clan and am an advocate of laughter and liberty.

The Straits Times reported on Tuesday (29 Jan) that ‘race activist’ Sangeetha Thanapal was being investigated by the police for a Facebook post upon her return to Singapore this year. The post in question was from last April. It alleged that Singapore was a ‘terribly racist country’ where minorities are systematically marginalised.

Are her claims true? 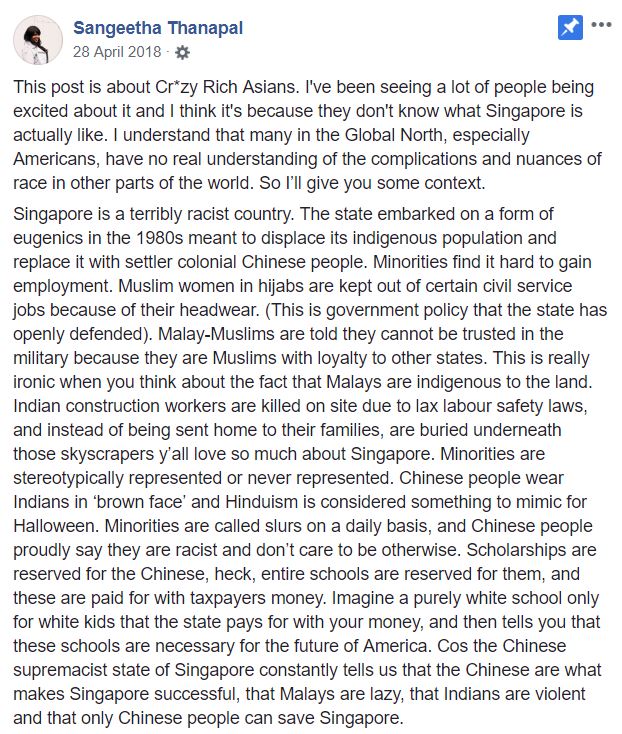 The state embarked on a form of eugenics in the 1980s meant to displace its indigenous population and replace it with settler colonial Chinese people.

I assume that Thanapal here refers to the population planning policies of the 1980s. Yes, the government then tried to increase marriage and birth rates after its previous efforts to stem childbirth proved to be too successful. There was indeed some degree of social engineering going on. However, there is no evidence to prove that this was a race-targeted campaign. Both disincentives in the 1970s and incentives to have children in the 1980s were targeted to all races.

2. Muslim hijabs in the civil service

Muslim women in hijabs are kept out of certain civil service jobs because of their headwear.

This claim if read in isolation suggests that there is a structural law against Muslim women in the civil service because of their religious identity. This is patently false. The civil service jobs that Thanapal speak of are those in the medical profession. The hijab headwear is restricted in these jobs for functional and symbolic reasons of maintaining a consistent organisational identity due to the public nature of the job. The restriction is the same in nursing schools. If Thanapal’s claim is accurate, then we would find the hijab also banned in other civil service sectors such as office administration and schools. They are not.

3. Muslims in the military

Malay-Muslims are told they cannot be trusted in the military because they are Muslims with loyalty to other states.

Yes, Muslims are restricted from joining the Navy and Air Forces under the rationale that they might be put in a position where they have to choose between their religion and nation. Other racial minorities however, are not subject to the same restrictions. Thanapal gives the impression that this is a matter of race, when it really is one of religion and national patriotism. This may be objectionable on other grounds, but not on the basis of race.

4. The dead buried under skyscrapers

Indian construction workers are killed on site due to lax labour safety laws, and instead of being sent home to their families, are buried underneath those skyscrapers.

This seems to be the wildest claim with zero basis. Accidents happen, but the claim that the deceased have not been given proper funerals makes this claim pure conspiracy theory.

5. Minorities underrepresented because of racism

Minorities have been subjected to vulgar stereotypes at times and we should call it out when it happens. But to claim that minorities are underrepresented is puzzling.

The broadcasting arm of mainstream media is officially segregated into different racial platforms: Channel 8 for the Chinese, Suria for Malays and Vasantham for Indians. In print, we have Lianhe ZaoBao/WanBao, Berita Harian and Tamil Murasu. Students of Singapore’s history are also aware of the country’s past conflicts between the Chinese high schools and universities of the day and the early PAP government. In the 1970s, the Chinese daily newspapers Sin Chew Jit Poh and Nanyang Siang Pau saw dozens of their staff arrested under the Internal Security Act because they were playing up Chinese language issues which the Prime Minister warned against.

To suggest that the government has been attempting to subvert the voices of racial minorities is untrue. They have been more concerned with maintaining religious and racial harmony.

6. Schools reserved for the Chinese

She claims that entire schools are reserved for the Chinese, in reference to the Special Assistance Plan (SAP) schools introduced in 1979. The SAP schools formed a 7% minority of all secondary schools. These schools were not ‘reserved’ for minority students since they could be admitted and are free to study Mandarin as well, although this was unlikely for socio-cultural reasons. While these schools were partially tax-funded, they were predominantly privately funded. It is undeniable that the use of some tax funds have unfairly benefited the Chinese population by privileging Mandarin as a second language.

Is Singapore a ‘terribly racist country’, as Thanapal boldly asserts? The answer is no. 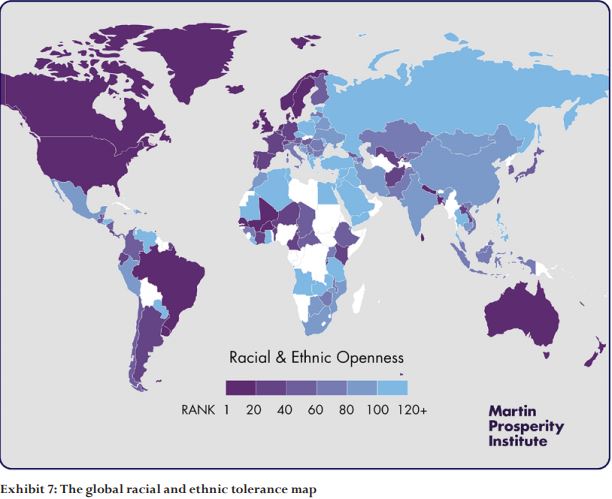 We can have some perspective by looking at some empirical data from macro studies that have attempted to measure “racial discrimination”.

Does this mean however there is no racism in Singapore? Of course not. There will be always be individual instances of racist behaviour. This is not a ‘Singapore’ thing, but a human thing. But there is plenty of evidence that seriously undermines Thanapal’s claim that Singapore as a whole is a ‘terribly racist country’.

Before we get carried away with broad sweeping claims of widespread racism, we need to have some global perspective on the issue. Singapore is not a deeply racist society. On the contrary, we have one of the highest levels of racial and ethnic cohesion in the world. All this despite the fact that Singapore scores the highest in the world on its Religious Diversity Index!

It is undeniably true that certain policies have benefited the Chinese majority. But the Singapore government has on many occasions taken measures to uphold minority rights.

Our Group Representation Constituency (GRC) system has a racial diversity quota to ensure minority representation in Parliament, and the last presidency was controversially reserved for a racial minority candidate. The Presidential Council for Minority Rights also acts as a government body that safeguards minority interests by scrutinising laws.

Two government institutions, the Council for the Development of Malay-Muslim Children (MENDAKI) and the Association of Muslim Professionals (AMP), are dedicated to assisting Malays through tuition subsidies at the tertiary education level. These self-help groups were so successful it was eventually extended to all other races, as I have wrote elsewhere.

The theme of racial equality is consistently reflected in the Singapore National Pledge and the annual Racial Harmony Day celebration in public schools. The HDB public housing system also imposes a racial diversity quota, ensuring that the socioeconomic problems of racial groups are not clustered and isolated from general society.

The narrow lens of race

When we take a broader perspective, it is eminently clear that Thanapal is engaged in systematic cherry picking to advance a faulty one-sided narrative. Many of Thanapal’s claims are overgeneralisations that only capture a sliver of truth.

Not only that, there is a dishonest attempt to extrapolate the wrongful behaviour of a minority few to the Chinese majority at large. Individuals can be racist, but it is unreasonable to start drawing broad sweeping accusations of people based on the colour of the skin. That in fact, is the very definition of racism.

The narrative that she painstakingly tries to push, simply fails to hold up to the facts.

Calling Singapore a “terribly racist country” when it is not only creates unnecessary ethnic and racial conflict. Let’s bear that in mind with Chinese New Year around the corner. As I wrote elsewhere, we should celebrate each other’s cultures without fear.

Seeing every social ill through a narrow deterministic lens of race is not a helpful guide in tackling sensitive race issues.

This was reposted from Mustsharenews.

MA graduate in PPE. I enjoy satire, spaghetti westerns, Wu-Tang Clan and am an advocate of laughter and liberty.

Check out our “Invisible Hand” Podcast featuring academics and thought leaders operating in the fields of PPE.

We hope to see you at our
latest upcoming events